Great Rhino Megaways is an online slot that provides you with up to 200,704 winning ways, and a chance to win a top prize of 20,000x your bet. The Pragmatic Play's slot game comes with tumbling reels and an unlimited free spins bonus that includes increasing multipliers. The maximum RTP of this high volatility video slot is 96.58%.

Below are our top picks for Great Rhino bonus offers. As always, we keep our list and all bonus codes up-to-date. We do this by checking the biggest Canadian online casinos on a regular basis. So whichever bonus or free spins no deposit promotion you go for, it's active right now.

As slot creators go, Pragmatic Play is one of the new kids on the block. They started their company in 2015 – five years later, Great raging Rhino is one of their best-known games. This safari-themed game features upbeat African folk music and a variety of animals from the continent.

In Spring 2020, Pragmatic Play launched the Megaways version of this slot game. PP licensed the Megaways concept from Big Time Gaming, but they certainly made this version their own. For starters, it adds tonnes of additional ways to win – instead of 20 pay lines, there are now 200,704 winning combinations. 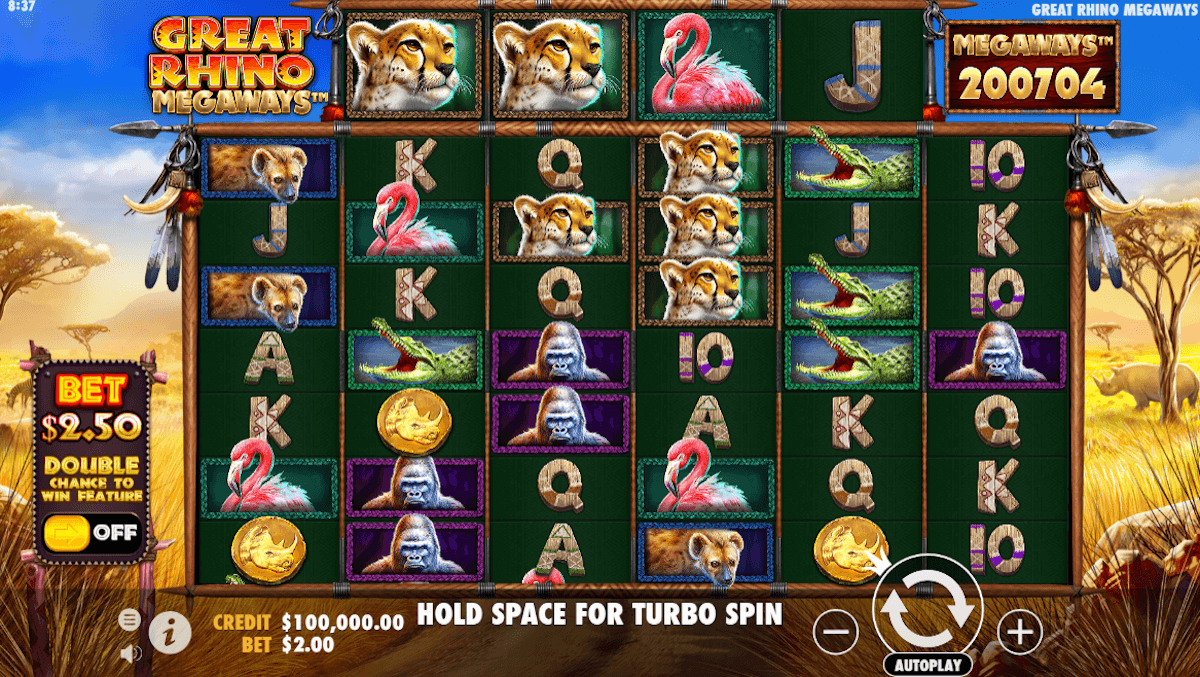 Great Rhino Megaways is a Pragmatic Play video slot you can play at most Canadian online casinos.

Many top Canadian online casinos carry Pragmatic Play games. So, as soon as Great Rhino Megaways was released, they added this fun slot to their lineup. These Megaways casino sites include, but are not limited to, the following: 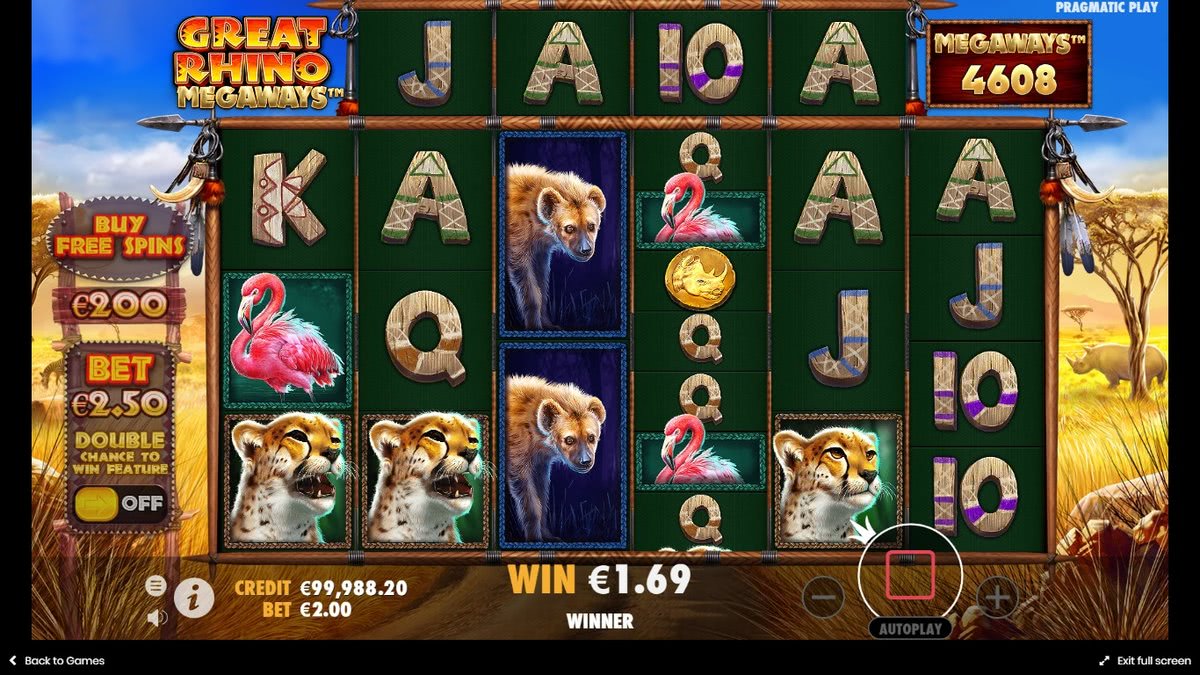 If your favourite Canada online casino hasn’t added Great Rhino Megaways, give it time. If they carry other Pragmatic Play slots, it’s only a matter of time before they add this title. However, if you don’t want to wait, feel free to check out the great Canada online casinos mentioned above.

Compared to the standard Great Rhino slot game, the Megaways version can be disorientating at first. Instead of the usual 5×3 setup, the game features an unorthodox structure. All reels can contain two to seven symbols. On top, over reels #2 to #5, a horizontal reel adds an additional symbol.

Once you get into the gameplay, though, things can get serious fast. The music, as usual, adds to the tension as symbols move into place. However, the addition of a tumbling feature is what excited us the most. When you hit wins, the spin doesn’t end. Instead, those symbols disappear, and new ones tumble down from above. If more wins result, you bag more cash, and the process continues until no more combos form.

All in all, we enjoyed our first encounter with Great Rhino Megaways. The only thing that bugged us was its high volatility. Sometimes, you can go many spins between big wins. When they come, though, they are HUGE!

Great Rhino Megaways online slot is a fantastic, atmospheric game. In this slot, you still have the African folk music and animal sounds you know and love. But, with ramped-up volatility, the big wins – when they come – are astounding. Rounds don’t end when you make a winning combo. Instead, the involved symbols vanish, and more tumble down. This creates chain reactions that can result in HUGE cash prizes.

And then, there’s the free spin round. When four gold rhino coins (the scatter symbol) hit the reels, you get spirited off to a game where massive hauls are possible. In short, the ever-present possibility of big wins more than make up for the sessions where you can’t seem to hit anything. That’s the beauty of Great Rhino Megaways.

But, when it comes to the base controls, though, it’s similar to most other slot games. At the bottom of the client are a series of buttons – we’ll discuss each, from left to right. 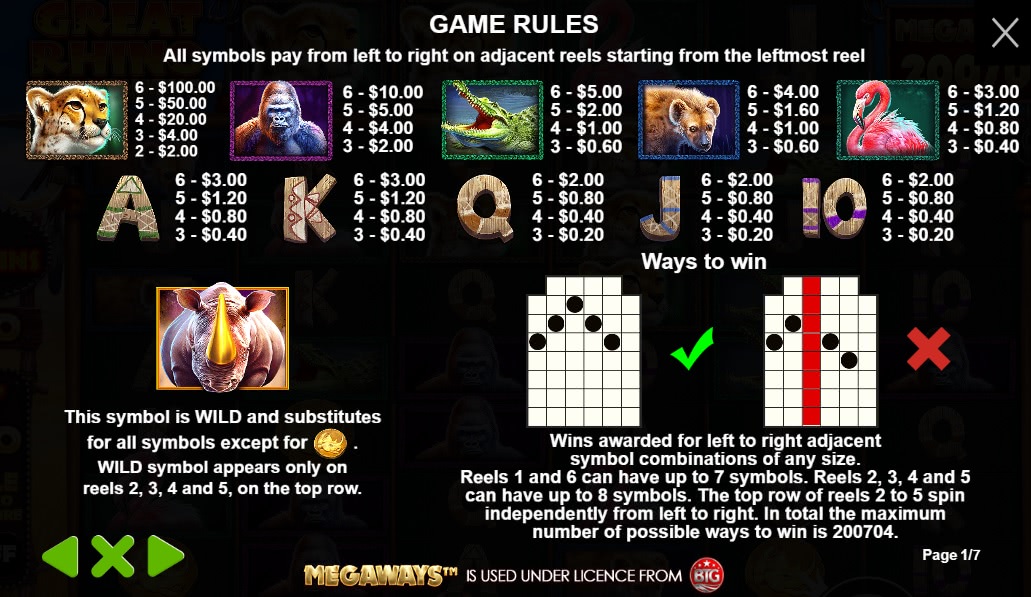 Megaways slots can be confusing at first – read up on the rules before playing.

The button with three lines opens a window where you can adjust specific settings. These include sound effects, music, spin speed, and more. You can also change your bet per spin – $0.20 is the minimum, and $100 is the maximum. Below it, the speaker icon allows you to control the music volume – clicking on it mutes the music entirely.

On the right, we have the bet sizer, spin button, and an autoplay feature. The bet sizer works precisely the way the one in the settings menu does. The spin button sets the reels in motion. And the autoplay feature allows automating your spins. The latter feature is useful if you need to answer the door, grab a snack from the kitchen, or if nature calls. While you’re busy, you’ll keep earning. To avoid busting your roll, you can also set stop/losses before letting the autoplay feature do its thing.

To play Great Rhino Megaways, click the spin button. The top row will align first, followed by the six reels below. Two to seven different symbols will move into place on each reel. Any combination of at least three (two for panthers) symbols left-to-right will result in a victory. In theory, any spin could give you up to 200,704 ways to win.

This slot features animals and A-10 card symbols. The former is worth more, and the latter less. Six tens will give 1x your bet, while six panthers (the most valuable symbol) gives 50x your bet. Rhinos are wild and substitute for any symbol to create winning combos.

To go to the free spin round, you’ll need to hit at least four rhino coins. Their position doesn’t matter – four rhino coins anywhere on the reels will get you to the bonus round. When you land on raging rhinos, it will trigger the free spins. Chance of triggering free spins increases if you click the gamble mode on. 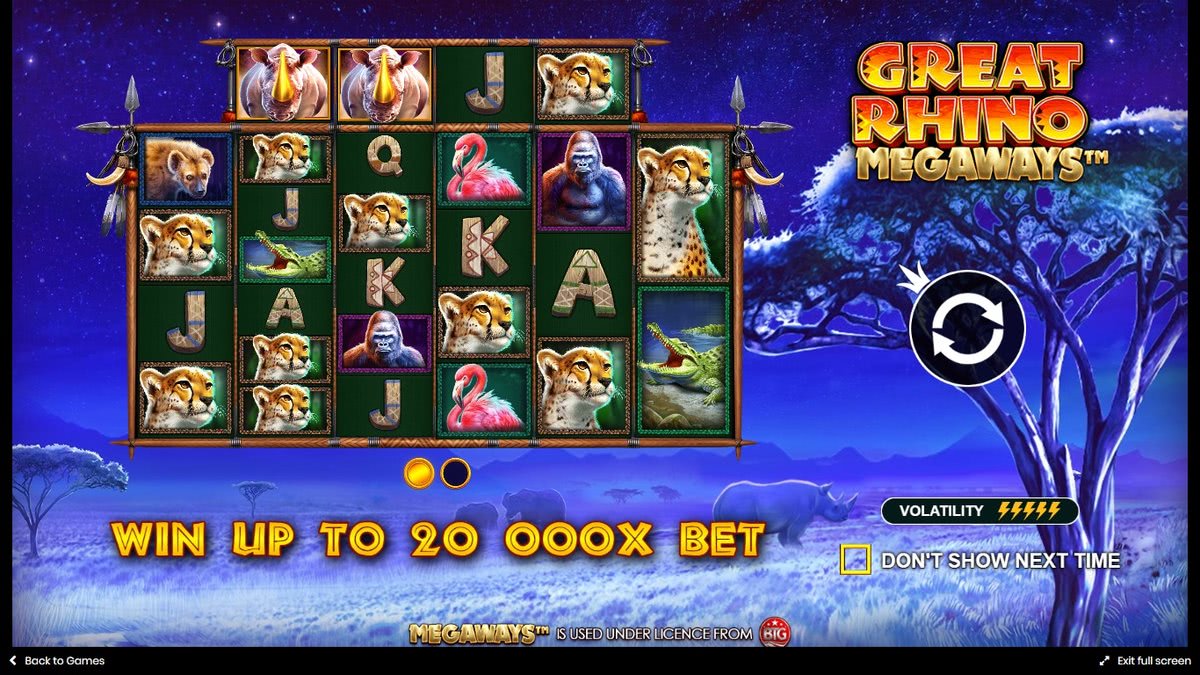 Great Rhino Megaways doesn’t have a jackpot. If you win 20,000x your bet, though, it’ll feel like you hit the jackpot.

Not only is Great Rhino Megaways is available for play on mobile devices, but its design is also significantly different from the desktop version. In it, the reels occupy the top half of the screen, with the bottom half dedicated to all the buttons.

They are well spaced-out, making all functions easy to access. There are also a couple of mobile-only features that are neat. Firstly, pressing and holding the “spin” button engages the turbo spin, which speeds up the reel and win animations. Second, tapping the reels ends the spinning animation, skipping ahead to the result. This setting increases the number of spins you can take per hour. If this appeals to you, it’s another reason to play Great Rhino Megaways on a top Canadian mobile online casino.

In Pragmatic Play’s short history, Great Rhino was one of its best titles. Sequel releases are always nervous occasions. However, it appears PP has done Great Rhino justice with the Megaways version of this game. With hundreds of thousands of ways to make combos, a 20,000x max win, a 96.58% RTP, and top-notch sound, this slot is a must-play.

Can I play Great Rhino Megaways slot for free?

Yes, you can. Head to Pragmatic Play’s website, and hover over "Products” on the top menu bar. Next, select "Slots & More Games” from the drop-down menu. Then, search for "Great Rhino Megaways” in the search box. Lastly, select Great Rhino Megaways from the results. Enjoy your free play session!

Yes. Pragmatic Play, its creator, has been licensed and regulated to distribute slot games by trusted regulators. These bodies include the Malta Gaming Authority, the UK Gambling Commission, and the Gibraltar Gambling Commission. To gain accreditation, Pragmatic Play must prove their online casino games are fairly run. In doing so, they must submit to an audit that evaluates, among other things, the veracity of their random number generator.

For this reason, you can be assured that Great Rhino Megaways is a legitimate slot title.

What are Megaways slot games?

Megaways slot games differ from standard 5x3 video slots in two main ways. First and most importantly, they use a random reel modifier that randomly spawns two to seven symbols per reel. For instance, one reel can can have six symbols, two in the next, four in the one after that, and so on. The next spin brings an entirely different configuration, as does the one after that.

Secondly, Megaway slots usually have a grid that is dramatically different from the 5x3 setup. In Great Rhino Megaways, for example, the top row spans reels #2 through #5, and it runs horizontally. All reels from the second row down spin vertically. And, when wins happen, symbols disappear, allowing more symbols to tumble down.

Meanwhile, other Megaways games can have totally different layouts. This creates tonnes of variety, which increases ways to win and replay value.

Shallyn is part of the team that has led Bonus.ca to several gambling industry award nominations, including: