Starburst XXXtreme is a spin-off of Starburst, a popular video slot created by NetEnt. In July 2021, Starburst XXXtreme, the long-awaited sequel to the Starburst slot machine, finally launched. It is a high volatility slot, which makes it an excellent choice to play with your casino bonuses.

Now, while no major welcome offers currently offer Starburst XXXtreme free spins, many online casinos do offer them for Starburst. What has changed about this classic? In this review, we'll dive into the features offered by this new slot.

Starburst Extreme is a relatively new slot game. We have listed bonuses for the best Canadian slot sites that already offer the slot game. You can use your casino bonus amount to play the game for real money. Here are the best Starburst XXXtreme casinos in Canada 2021: 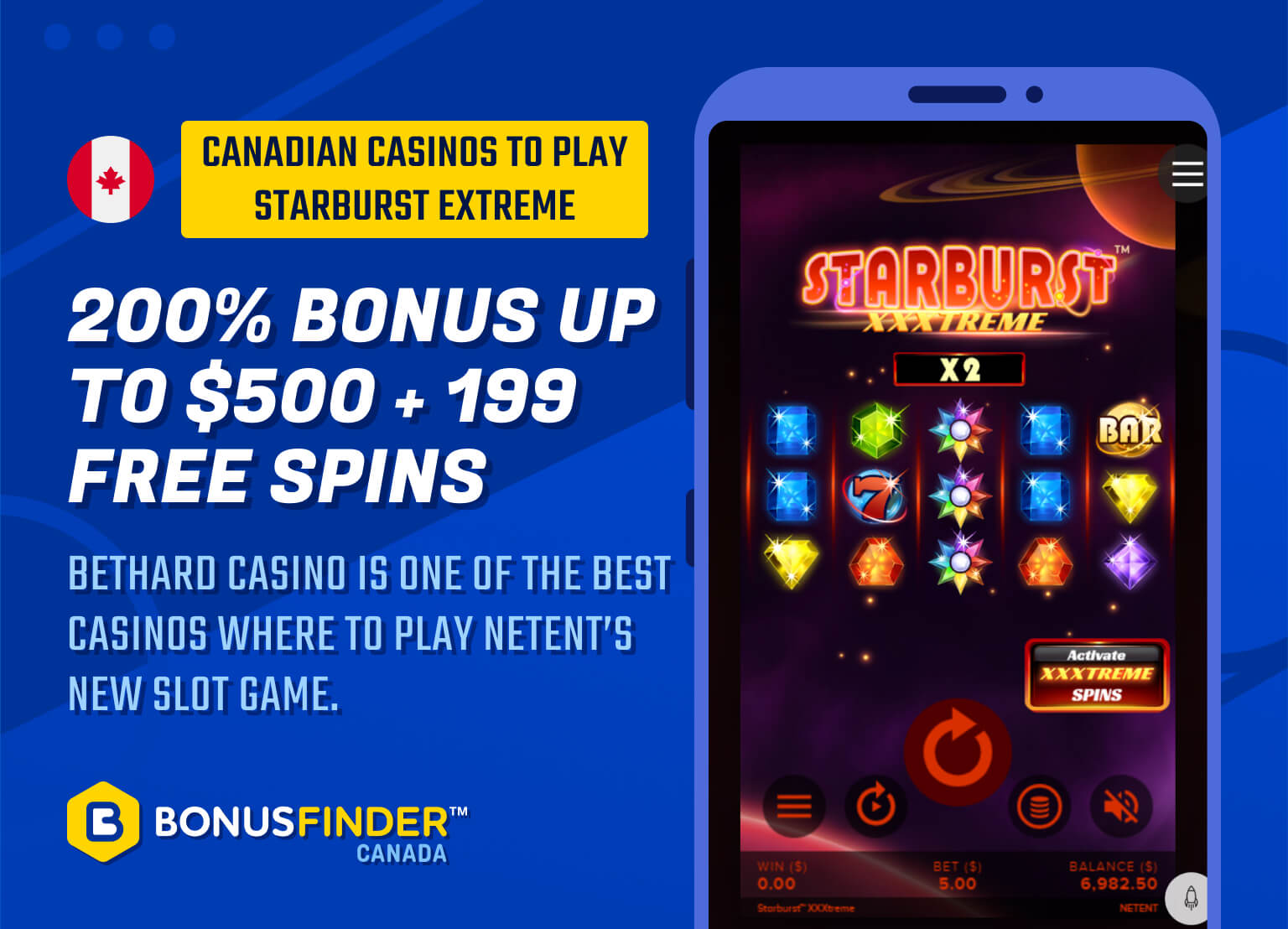 We have listed the best casinos where to play Starburst XXXtreme for real money. Bethard offers a 200% welcome bonus up to C$500 on your sign-up.

Since it’s a very new game, there isn’t any free spins no deposit offers available. You can play Starburst XXXtreme slot for real money with the welcome bonus money you get from Bonus.ca. Dunder Casino is our favourite Canadian casino site: When you deposit C$10, you get up to 500 Free Spins (C$0.10 per spin) to play Starburst XXXtreme for real money. 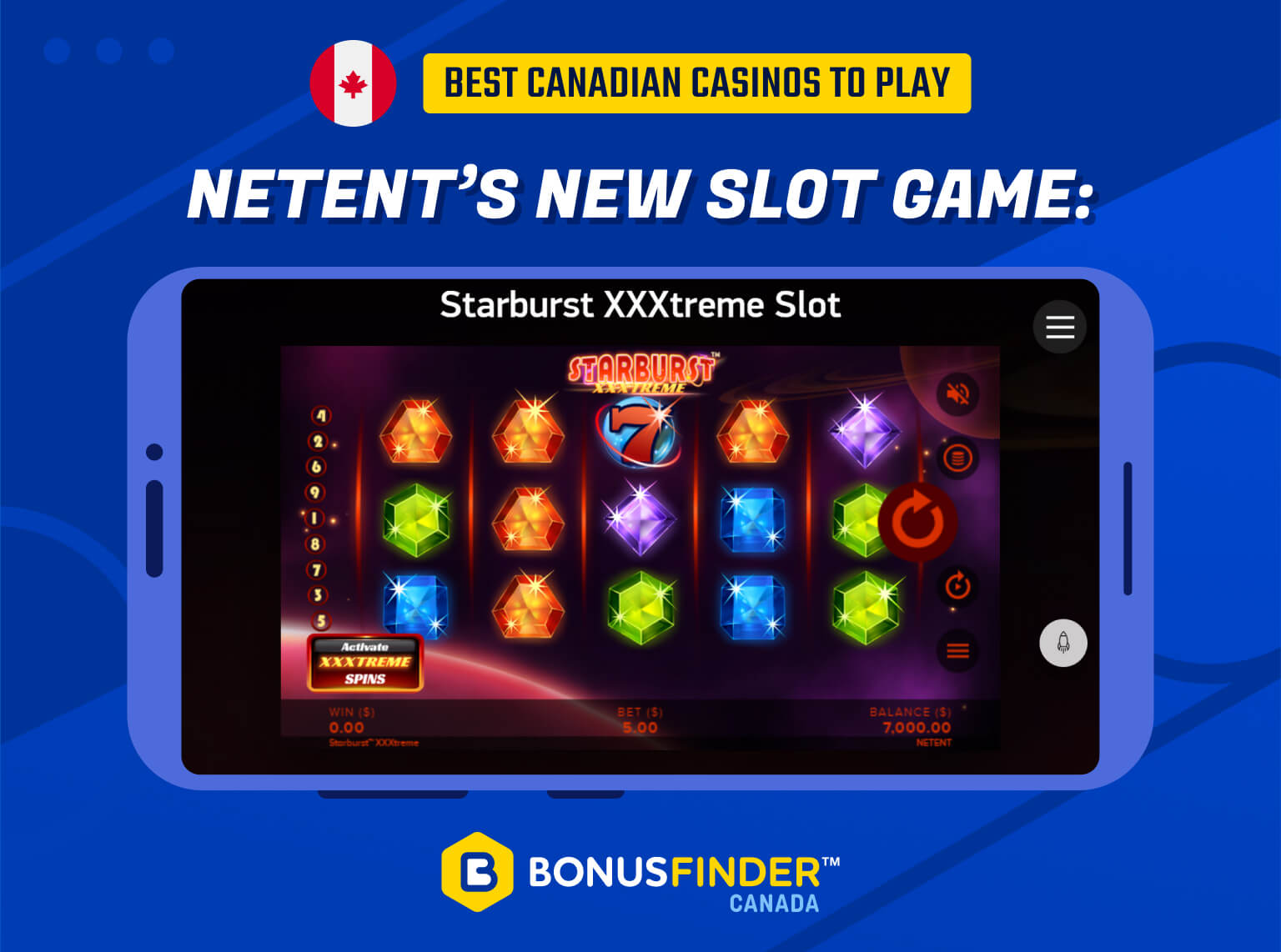 Bonus.ca has listed the best Canadian casinos where you can play the follow-up version of the legendary online slot.

NetEnt has developed many hits over the years. However, Starburst has been their most enduring success. Nearly a decade later, scores of online casinos still offer new customers Starburst Free Spins. This fact alone demonstrates this franchise’s popularity.

Starburst XXXtreme is this game’s long-awaited sequel. But on the surface, not much appears to be different. Even the soundtrack is the same-old spacey tune we’ve all grown to love. You can test the game for real money at the Canadian casinos we’ve listed above. Most online casinos require a minimum deposit of C$10 from player looking to play for real money.

Starburst purists won’t be disappointed by Starburst XXXtreme. But it has one major new feature that cranks up the excitement.

You can play Starburst XXXtreme for free at NetEnt.com. Also, you can play this mobile slot at many Canada slot sites. However, some may require that you register an account first. Otherwise, you can hover over Starburst XXXtreme and click on “Demo,” “Free Play,” or other buttons to start a play money session.

About Starburst XXXtreme Slot from NetEnt

As you’d expect, this game does indeed differ from its predecessor in several ways. For one, the game has adopted some simple (but trippy) animations. However, that’s not the biggest change – we’ll get into that later.

Here are some basic facts about Starburst XXXtreme:

Not getting any wilds? In Starburst XXXtreme, you can buy them!

If you’ve played the original Starburst, you’ll slide into this title hand-in-glove. For the most part, its features, bonus games and gameplay mechanics are the same. There is one big difference – the “Activate XXXtreme Spins” feature. Compared to other NetEnt’s slots or any Megawaways slot, for example, the Starburst Extreme game mechanics are easy to understand.

In Starburst XXXtreme you have the opportunity to buy one of the two XXXtreme spins features and the RTP increases from 96.26% to 96.45%.

In Starburst XXXtreme, the symbols are the same as in the popular first version of the game. You have the gems – purple, blue, red, green, and yellow – and the 7s and BARs. We’ve listed these symbols in ascending order – yellow gems are worth more than purple gems, and BARs are worth more than 7s.

As for exact values, let’s assume a base wager of $1 per spin. Lining up three purple gems is actually a loss, as it only pays 0.5x your bet. But get five yellow gems, and you’re doing much better, as this will give you 6x your wager.

But as you can imagine, the BARs and the 7s are where the money’s at. Five 7s will net you 20x your bet, while five BARs will give you 50x your wager. Bear in mind this is just per line – fill the five reels with BARs, and you can win up to 200,000x your bet. There are slots with higher maximum winnings like Mega Moolah and Mega Vault Millionaire . Slots with a progressive jackpot pool makes them attractive for some player types.

As in the original title, the Starburst symbols act as the wildcard in Starburst XXXtreme. In this game, they appear on reels two, three, and four. When they do, they expand to cover the entire reel. Then, they represent the symbol that can create the best possible combo.

As you can imagine, this situation can lead to some big wins. But the winning doesn’t stop there – the appearance of Starbursts automatically trigger a free re-spin. So, if you didn’t hit it big the first time, perhaps this mulligan will pay off!

Like the original Starburst, Starburst XXXtreme is a high volatility slot machine. That means that sometimes, Starburst wilds come in droves. But then, you could go hundreds of spins without seeing any winnings combinations at all.

For a slot that lacks a bonus round or a jackpot, this can grind on casual gamers. So, when NetEnt was crafting the Starburst sequel, they came up with the idea of XXXtreme Spins. Here’s the concept: in return for paying a premium of x10 your bet per spin, you’ll get a guaranteed Starbursts on one reel. Or, by paying x95 your bet, you can get guaranteed Starbursts on TWO reels.

When we saw the title of the Starburst sequel, part of us was worried. Would NetEnt radically change the gameplay experience that made the original so popular? The answer to that is no. The look and feel of this game remain mostly unchanged. Apart from some minor retouches, it still has the same spacey atmosphere. If anything, its developers were a bit too conservative – for instance, all the symbols are still the same.

But it’s the addition of XXXtreme spins that makes this sequel worth playing. Like the original, the slot game doesn’t have a bonus round. But they still took a page out of the “bonus buy” playbook by allowing players to purchase wilds. If you haven’t spun Starburst lately, give the new version a try – it’s a fun (and potentially profitable) trip down memory lane.

What is the Starburst XXXtreme RTP?

Starburst XXXtreme RTP is 96.26% for the base game. With the bonus feature spins activated (two reels), the RTP rises to 96.45%.

Why are Starburst slots so popular?

NetEnt has created some of the most popular online slots. Players know that when they see video slots from NetEnt, they provide value, fair gaming conditions and a fun gaming experience online.

Can I play Starburst XXXtreme for free?

Yes. You can visit NetEnt’s website, where a demo version of Starburst XXXtreme is available. Also, many online gambling sites allow you to play Starburst XXXtreme for play money. You get the best value for your money when you claim bonuses from Bonus.ca.

How volatile is Starburst XXXtreme?

Starburst XXXtreme is a high volatility slot. This classification means that wins often come in bunches. Unfortunately, it also means that losing streaks may last longer than those on lower volatility online slots.

Shallyn is part of the team that has led Bonus.ca to several gambling industry award nominations, including: